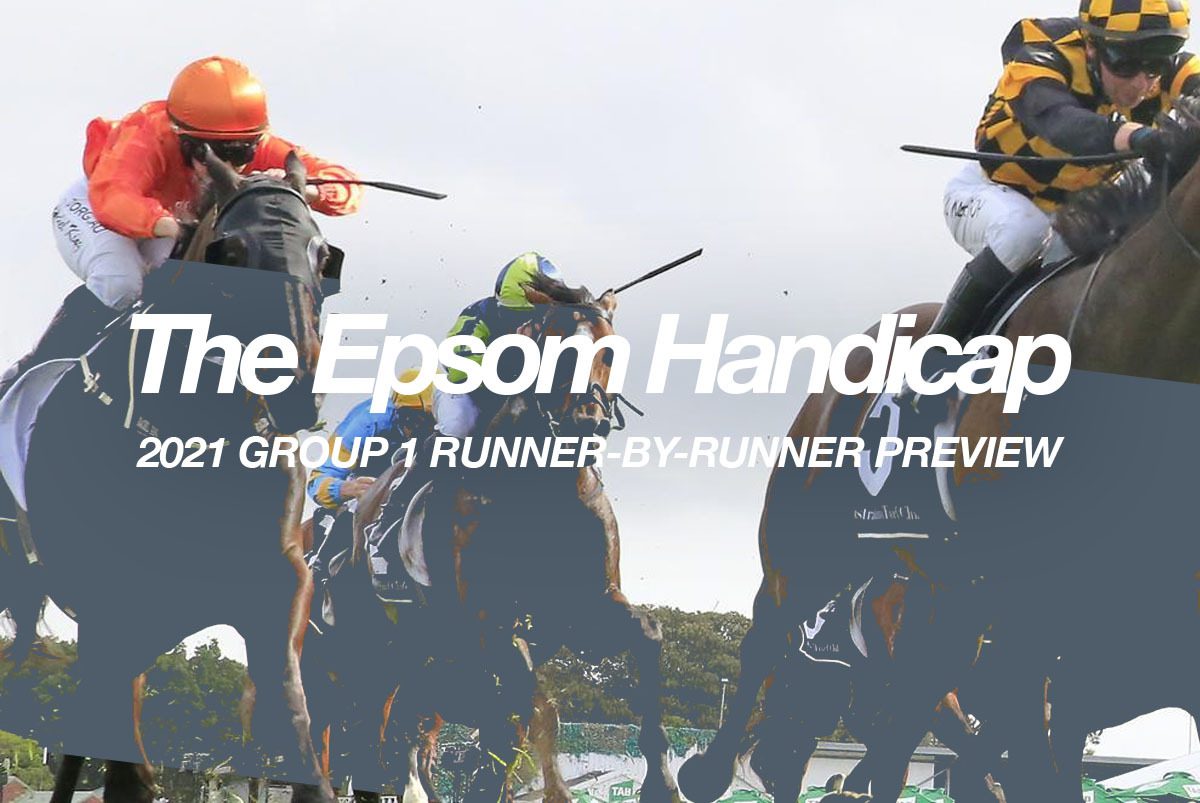 HorseBetting’s New South Wales form analyst brings you his runner-by-runner preview and $100 betting strategy for the Group 1 Epsom Handicap at Royal Randwick this Saturday. While it is not the strongest edition of the $1.5 million feature, it does create a terrific betting race. There appears to be plenty of speed drawn wide, mainly from Riodini, Harmony Rose and Ashman, which gives those drawn low a cushy run in the race. Riodini has opened as the $4.40 favourite ahead of Private Eye ($7.50), Mo’unga ($8) and Hungry Heart ($8). The 2021 edition of the Epsom has attracted a field of 17, and just four of those are Group 1 winners.

The top weight has been somewhat burnt by the handicapper here, so it will be a terrific feat should he be able to win the race. While Mo’unga is a four-year-old on paper, he was only foaled in late November, so coming out of two brilliant runs at weight-for-age level and to now be top weight in a handicap is a bit rich, in our opinion. Nonetheless, this two-time Group 1 winner defeated Verry Elleegant first-up in the Winx Stakes and has since run second behind Incentivise and Sir Dragonet in the Makybe Diva Stakes, so the horse is obviously flying. He will need luck from barrier 13 and the big weight is a concern.

The 2021 Doncaster Handicap winner gets back to the scene of the crime, but he does have to carry 3.5kg more than what he did back in that autumn feature and is not going anywhere near as well. If Cascadian was the feature in the finish this weekend, he should have been hitting the line better than what he was last time out in the George Main Stakes.

South Australian visitor Dalasan is a genuine chance in this year’s Epsom if he can replicate the two runs he had at the end of his autumn campaign when third in both the Doncaster and the Queen Elizabeth Stakes. The son of Dalakhani has had two runs in this preparation, finishing down the track over 1200m at Moonee Valley before chasing hard behind Sierra Sue in the Group 1 Sir Rupert Clarke Stakes last time out when only 2.6 lengths off the winner. Stepping out to a mile third-up into his campaign, Dalasan should be peaking fitness-wise and relishing the soft conditions. From barrier eight with James McDonald on his back, he should get every conceivable chance.

Star Of The Seas

After a brilliant run in the 2020 Doncaster Handicap, Star Of The Seas promised the world and delivered nothing. The seven-year-old is still chasing his maiden Group 1 win, and although he gets his wet track and onto the Randwick mile, he will be left waiting for another day.

Trainer John O’Shea has made it no secret that his Randwick Guineas winner would be targeted at this race, but if you’re an owner of Lion’s Roar or a fan of the horse, you would be left scratching your head after his first two runs. The four-year-old gelding beat just one runner home in both outings and finished a combined 29 lengths off the winners, tailing off on both occasions. The son of Contributer has trialled since his last run and went OK, but he would need to improve 30 lengths to be competitive in this.

One of the leading fancies in the market is this four-year-old mare, Hungry Heart. Trained by Chris Waller, the daughter of Frankel was super when fourth in the George Main Stakes a fortnight ago and drops 4.5kg from that run, which should bring her right into this. Hungry Heart won the Group 1 Vinery Stud Stakes and Group 1 ATC Australian Oaks in the autumn over staying trips, so she may find the mile too sharp for her, but she looks to be set-up perfectly for this race. All of her wins have been on Good going, though, so keep an eye on the weather forecast.

While Hungry Heart will be praying that the rain stays away, Icebath will be doing a rain dance in her box in the week leading up to the race, and if her prayers are heard, she will be a genuine threat. While she has not drawn all that well in barrier 14, the five-year-old mare was beaten a pimple in both The Golden Eagle and the Doncaster Mile, which were both run on wet tracks, so she has to be considered here. In with only 52kg on the back of a great run in the Golden Pendant seven days ago, Icebath should be peaking for this race and will be very hard to beat.

Six-year-old gelding Rock has not found the form he showed two seasons ago, running a well-beaten ninth in the Cameron Handicap at Newcastle last time out. The son of Pierro is a $71 chance according to the market, which is about right.

Riodini lines up in his second Epsom, this time as favourite after two brilliant runs this campaign where he has finished second to Think It Over and Verry Elleegant. Having led in both of those runs, Rachel King will be out to pinch this Group 1 with only 51.5kg, some 7.5kg less than what the horse carried against Verry Elleegant last time out. Drawn wide in barrier 15, Riodini could find himself in a spot of bother early with speed drawn directly inside and outside of him. He is a winning chance in this, for sure, but we can’t take the $4 about him.

Aramayo has had the perfect Epsom campaign, finishing in the minor money in both runs. First-up, the son of Poet’s Voice was an eye-catching second behind Zaaki in the Tramway Stakes, and he caught the eye again when third to Atishu in the Bill Ritchie Handicap under 58kg. Originally trained in Australia before going to Singapore, where he won two Listed races, Aramayo is now back in Australia and can add a Group 1 to his name. The six-year-old gelding drops 6.5kg from his most recent run and gets Alysha Collett in the saddle – arguably the best jockey on the New South Wales provincial and country circuit at the moment. Drawn perfectly in barrier five, Aramayo is the horse to beat.

Reloaded has spent his last six months in Queensland, where he has really only plodded, although he did win a Listed race and a Group 3 up there in May. The son of Snitzel raced seven days ago in the Shannon Stakes and loomed as the winner before being grabbed late by stablemate Yonkers. He gets in light here with ‘Group 1 Bossy’ in the saddle from barrier six, but he would need to improve sharply to win an Epsom.

Private Eye was the early favourite for the Epsom after a brilliant first-up win in the Show Country Quality on August 21, but he has been slightly disappointing at his two runs since, finishing seventh and fourth respectively. The four-year-old gelding rarely stays out of form for long, winning seven of his 12 races, so if he were to bounce back here, we would not be surprised. Drawn well in barrier seven under Regan Bayliss, the son of Al Maher will get back in the run but should be doing his best work late over a hot tempo. The 51kg is very appealing too, so you cannot dismiss this Group 2 winner.

Atishu won herself a spot in the Epsom by winning the Bill Ritchie a fortnight ago at Randwick over 1400m. The former New Zealand mare came to Australia in winning form and continued that in her first Australian start by saluting stylishly in Benchmark 88 company. The Savabeel mare was given no hope at her next start but made amends by defeating Looks Like Elvis and Aramayo last time out. She drops 3kg from her last win and gets every chance from barrier 11. Is she good enough for Group 1 level yet?

The Waterhouse & Bott stable could train a Shetland pony to win a race with the form they’re in at the minute, but Discharged looks to be up against it. Drawn in barrier two with no weight on his back, he is going to roll along in front alongside his stablemate Riodini, but we don’t think he brings good enough form to win an Epsom.

Ashman won his spot in the final field with an all-the-way win in the Cameron Handicap at Newcastle on September 17, hanging on to defeat the fast-finishing Sky Lab and Duais. He found the front comfortably in the Cameron from barrier one, so the outside alley here presents the son of Magnus with a few more issues, but if he jumps cleanly and gets across, he will become a nuisance for the likes of Riodini. He was a surprise winner of the Cameron, but we’d fall over if he backs it up in this.

We have a massive soft spot for Mark Newnham’s grey mare, and although Harmony Rose was disappointing when sixth first-up, she was given a shocking ride by Rachel King. The daughter of Glass Harmonium’s best asset is her cruising speed, and although she was tardy away out of the gates in the Bill Ritchie, she was restrained and ridden with cover, which just didn’t suit. The wide barrier is a concern, but provided she jumps well and gets over to the rail, Harmony Rose will give this race a massive shake, especially if it is wet. She ran third in the Randwick Guineas at this track and distance in the autumn, and she now meets Mo’unga 4.5kg better compared to the last time they met. The $23 is over the odds if she brings her best.

Rounding out the field is the consistent Sky Lab, who is sure to give this race a shake at odds. The son of Real Impact was beaten 0.2 lengths by Mo’unga in the Rosehill Guineas and meets the top weight 6.5kg better, which is a huge advantage. Last time out, Sky Lab was wide throughout in the Cameron Handicap and only just missed to Ashman, going down by seven-hundredths of a length. He carried 54.5kg that day, so the significant weight drop will be to his liking. From barrier four, in-form jockey Tim Clark is going to give the four-year-old a great run on the back of the speed, and he should be hitting the line strongly late. A wet track will give him an edge too.

We are siding with Aramayo in the Epsom as the race just sets up perfectly for him from barrier five with a featherweight. His two runs this prep have been super and he has looked to be crying out for a mile, which he now gets third-up. If Harmony Rose jumps better and can get some peace in front or stalk the Waterhouse & Bott pair, she can run a massive race, while Sky Lab and Icebath will be coming home strongly with Aramayo.